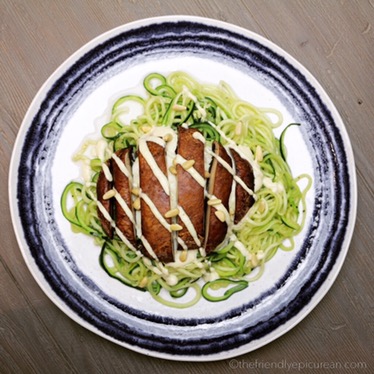 The combination of the zucchini, portobello mushrooms, and alfredo sauce in this recipe is just ridiculously good!

Last week, I finally broke down and bought a spiralizer machine that makes vegetable noodles. I have to admit, I had serious veggie noodle envy and needed to try them. I bought the tabletop OXO brand spiralizer machine which was super easy to use and clean up. The combination of the zucchini, portobello mushrooms, and alfredo sauce in this recipe is just ridiculously good. If you’ve never tried nutritional yeast, don’t worry! It’s nothing to be afraid of and tastes very similar to Parmesan cheese. It’s great as a topping or in sauces and is a great source for vitamin B12 (which is usually only found in animal products). I buy mine at Whole Foods. One package lasts a long time and I store it in the fridge once I open it. This dish is actually quite filling and I didn’t miss the pasta one bit!

For the vegan alfredo sauce:

Place 1 cup cashew cream sauce, 2 tbs nutritional yeast, 2 cloves of garlic, and a pinch of salt (to taste) in a blender or food processor and blend until smooth.

For the portobello mushrooms:

Preheat oven to 425F. Place mushrooms bottom sides facing up on a baking sheet. Brush both sides of the mushrooms with olive oil. Sprinkle a pinch of salt and pepper on mushrooms. Roast mushrooms in oven for 5-8 minutes.

For the zucchini noodles:

Make the zucchini noodles using a spiralizer. Wrap the noodles in a clean dish towel for 5 minutes to remove excess water.

Next, remove the zucchini noodles from the towel. In a medium sized sauce pan, saute noodles on medium heat for 2-3 minutes. Do not overcook. Toss with remaining olive oil and a pinch of salt and pepper to taste. Divide noodles into two portions.

Top each portion of zucchini noodles with 1/4 to 1/2 cup of vegan alfredo sauce and 1 sliced portobello mushroom.

Hello! My name is Jyothi – I’m an allergy doctor and live in the San Francisco Bay area. As a physician, I see how much diet and wellness affects health and hope to help you make healthier choices. My love for cooking, wellness, travel, beauty, and fashion inspired me to start blogging. I hope my blog inspires you to cook, improve your wellness, and stay healthy!