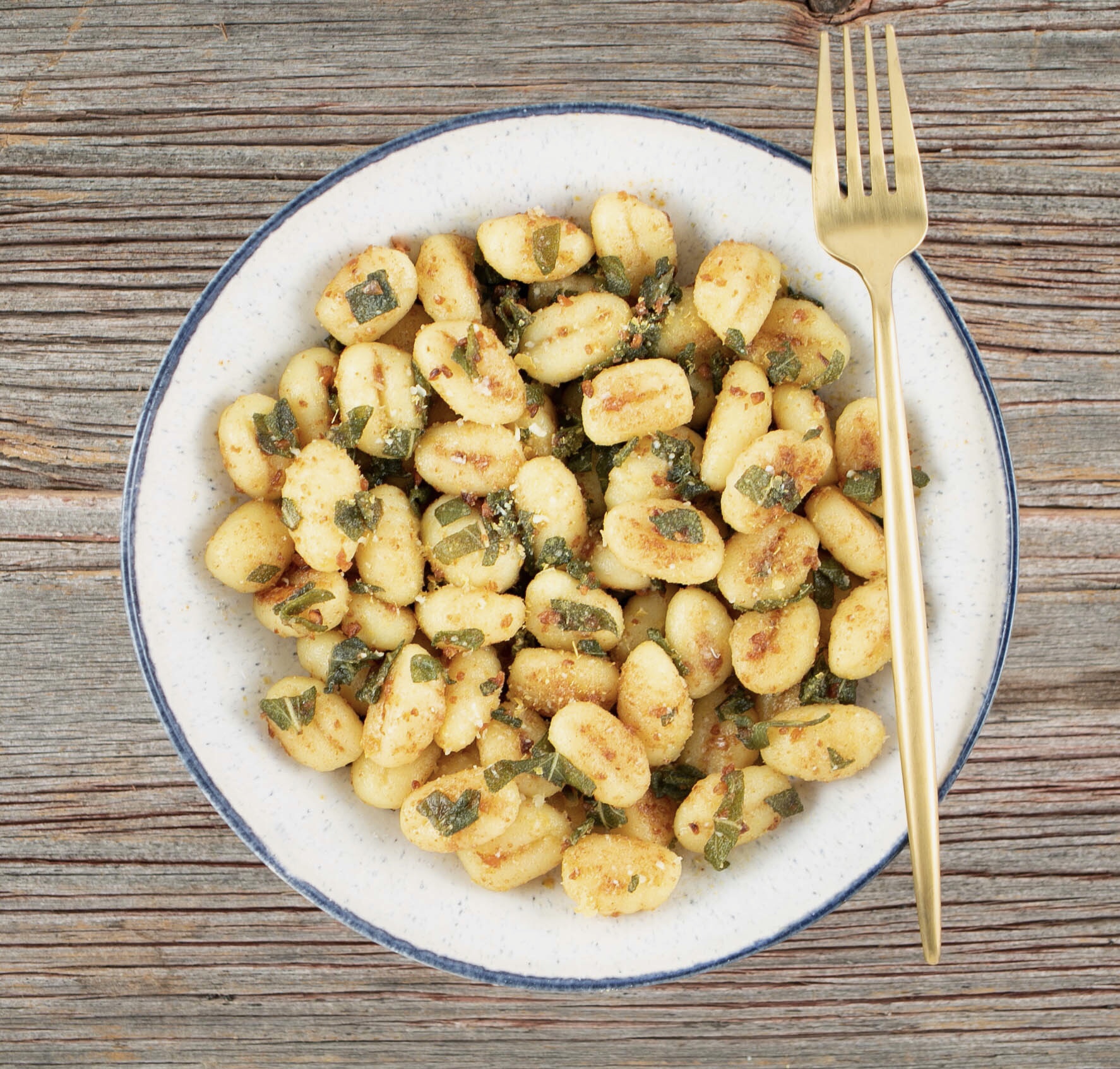 Brown butter is a decadent addition to any pasta dish. I love it over vegetables like mushrooms and cauliflower as well. It seems like an intimidating thing to make but with a little patience, you can perfect your technique. Brown better has a nutty, rich flavor to it that’s altogether different than regular butter. I didn’t think vegan butter could brown but then I discovered Miyoko’s butter. I happened to look at their website and noticed that they had a brown butter recipe. Surprisingly, this vegan butter does brown – it didn’t get the same color as regular brown butter but had a similar flavor. Brown butter and sage is a classic combination that adds a deep, fragrant, nutty flavor to whatever you add it to. I didn’t make my own gnocchi but there are lots of recipes for potato gnocchi that look very doable. I like to use fresh gnocchi because it has the best flavor and texture.

Gnocchi are actually small dumplings made of pasta and potato. Gnocchi is typically vegan but some versions of it contain eggs, so make sure to read the ingredient list. Gnocchi is all about the texture. It should be soft, a little chewy, and melt in your mouth. It shouldn’t be tough or too dense. With fresh or homemade gnocchi, you can skip the boiling part. It will cook directly on the pan. Since this is meant to be a quick, pantry friendly recipe, I included boiling instructions for store bought gnocchi that’s either from the refrigerated section, pasta aisle, or frozen section. Store bought gnocchi does have a bad reputation but there are some pretty good brands such as Nuovo (at Whole Foods) out there that you can find in the refrigerated section. Trader Joe’s cauliflower gnocchi is also reported to be worthy according to Google. This is a filling recipe and I usually don’t have room for much else after I eat it. It’s great as a desk lunch the next day as well. It’s a versatile recipe – mushrooms, peas, fresh lemon juice or lemon zest would be excellent additions. Gnocchi can be served as an appetizer or a main course. If you make this recipe, make sure to take a picture and tag @thefriendlyepicurean on social media or pin this recipe on Pinterest!

Bring 5 quarts of water to boil in a large pot. Boil gnocchi for about 3 minutes or until they start to float to the top. Drain gnocchi and set aside. Place butter in a medium sized saucepan or cast iron pan (big enough to hold all the gnocchi). Heat butter on medium-high heat, stirring constantly until butter starts to turn golden brown and small brown flecks appear. It will initially appear foamy. Watch butter carefully as it can burn quickly. Turn off heat and allow to cool for about 5 minutes (to prevent splattering when adding sage). Next, turn heat back up to medium and add sage and garlic. Saute until sage starts to shrivel and garlic is fragrant, about 3-4 minutes. Add gnocchi and pan fry gnocchi about 3-4 minutes on each side, until they are golden brown. Add salt plus more to taste. Sprinkle with nutritional yeast or vegan parmesan just before serving.

Credits
This recipe is based on the following: